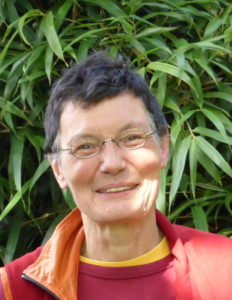 Tengye met the Dharma in Bordo in 1991 and started to practice more seriously after an encounter with Gendun Rinpoche in 1997. From 2005 to 2011 she completed two three year retreats in Kundröl Ling in Auvergne and then stayed for some time in her house near to Kundreul Ling practicing, studying and tending her garden.

Since 2014 she is in charge of the dharma activities in Bordo in northern Italy and actually is also coordinating the volunteers and guest activities. In connection with this responsibility and encouraged by Lama Jigme Rinpoche she engaged in the Bodhi Path teacher training first with Lama Jungne in France, then with Karma Trinley Tulku in Renchen-Ulm. She is mainly teaching in Bordo, but increasingly also in other dharma groups and centres.